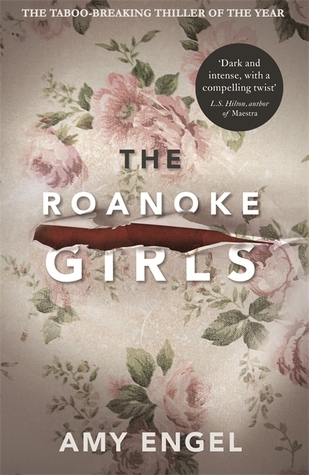 “Roanoke girls never last long around here. In the end, we either run or we die.”

Don’t let the dainty floral cover of the The Roanoke Girls fool you, what lies inside the pages of this pretty little book is sick, twisted, and completely disturbing– in the most tantalizing way.

Lane Roanoke’s mother hanged herself in her New York apartment when Lane was just 15 years old, leaving her with no other option but to move to Kansas to be with her grandparents and cousin she’s never met, in a house that has a name like a person, Roanoke.

During the summer Lane moves to the lavish Roanoke estate, she seems to be having a much different experience with her stunningly handsome and charming Granddad, her perfectly polished Gran, and her hell-raising, bombshell of a cousin Allegra, who teaches Lane she is what other girls only envy to be: a rich, beautiful, mysterious Roanoke Girl.

But it only takes Lane this one short summer at Roanoke before she too uncovers something so terrible, she is left with no choice but to run.  After spending 11 years in LA trying to purge herself of the forbidden secrets drifting the halls of Roanoke, she is lured back by a desperate call from her Granddad: Allegra, the girl who vowed never to leave the estate, has disappeared without a trace.  Consumed with guilt for abandoning the cousin she considered a sister 11 years ago, Lane returns to Roanoke to search for Allegra, and the truth about what happened to her.

Proving herself a master story-teller, Amy Engel seamlessly intertwines “then” and “now” story-lines, as well as short excerpts from past generations of Roanoke women, to carefully unveil this web of treacherous family secrets and the unfortunate legacy of the Roanoke Girls.  Even though very early into the story the taboo “twist” is revealed (and rather bluntly rears its ugly head), Engel keeps the reader on edge until the last page, curious and anxious to illuminate the full extent of the darkness.

While this book will certainly cause readers to squirm uncomfortably (or want to puke in their hands) on several occasions, Engel keeps the story grounded in well-written, literary territory over insensitive shock-value.  It’s the overall strong writing, pacing, and the development of these damaged, imperfect characters that will keep the reader turning the page long into the night.

Not only does Engel keep the writing literary, but she has a knack for using minimal yet impactful imagery to carefully craft unease in a scene, without overwhelming the reader with long, flowery descriptions.  It’s effective, unsettling writing like this that transcended the story from a grotesque, taboo thriller to a haunting and powerful literary experience:

“It was nothing like that,” she said, voice flat.  She was sitting on the wide windowsill, knees drawn up into her cotton nightgown, smoke from her cigarette gathered around her like a shroud.  Her ragged toenails dug into the wood frame . . . She turned and glanced at me then, her skin pale and eyes red-rimmed.  The bones of her face looked sharp enough to cut.

If you are able to digest the surface plot, you can fully start to comprehend and appreciate the true theme of this story: rising above your own upbringing.  You are not who you came from, and it is possible to be more than the stains of your past.

I have to say though, the relationships portrayed in this story were the most compelling aspects for me.  Allegra, despite all of her own narcissistic flaws, was a very complex character, and the sisterly, thick-and-thin relationship she forged with Lane was one of the most positive and normal things about her simple, misguided life.  Despite Allegra being the belle-of-the-town, and even in the moments I wanted to slap the brat out of her, I found myself pitying her.

Not to mention, the somewhat toxic, eleven-year on-again/off-again relationship between Lane and teenage summer-fling, Cooper Sullivan, was, well, pretty hot. (Just try to read this book without picturing the blonde-haired, bad boy Cooper as Charlie Hunnam/Jax Teller, I DARE you.)  While their relationship did seem a little unhealthy at times, it was undeniable they were two broken, neglected souls who seemed to gravitate to one another and found refuge in each other. There was something raw and dysfunctional, yet beautiful and painfully honest about their connection.

While this is definitely a mature read and there are many triggers I understand some readers will not be able to stomach, my hope for those who do push past the ugliness is that they too will allow themselves to embrace the disgust, anguish, and pity towards the characters of this book, and let both the hideous as well as the heartbreaking beauty consume them, as it is after all intended to be a conflicting and emotionally engaging experience.

13 Reasons Why, Jay Asher – Disappointingly flat and one-dimensional compared to the show. If you loved the show and want to dive deeper into the minds of all the compelling characters you grew to love/hate,  sorry.  Sadly you won’t find a drop of character development in this book. 2/5 Stars

We Have Always Lived in the Castle, Shirley Jackson – From the author of The Haunting of Hill House and The Lottery, a dark, disorienting and unsettling story of two sisters vs. a horrible town that has its witty, chuckle-able moments. 4/5 Stars

Doctor Sleep, Stephen King – For someone who loved the eerie suspense of The Shining, I just expected something…else from  the sequel.  Like everything King writes, it was well-written, I just didn’t find myself super scared or super attached to grown-up Danny or the other characters of this book.  3/5 Stars

Change Places With Me, Lois Metzger – A (low-key) futuristic sci-fi story of a teenage girl who wakes up one day feeling not quite herself.  Odd, heart-breaking, and memorable, I don’t think I’ve read anything quite like this, but it will take a certain reader to truly appreciate the message of this strange story.  4/5 Stars

What do you want to talk about?